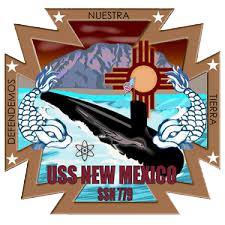 Announcing the selection, Commanding Officer of the USS New Mexico, Commander Mark Prokopius, said “we are obviously proud to be associated with such a distinguished and well known establishment. La Posta, her owners, Tom and Jerean Hutchinson, and their staff are very deserving of this recognition.”

The competition to name the galley included several restaurants throughout the state of New Mexico. Over several months, members of the USS New Mexico crew spent time at the competing restaurants observing and evaluating food preparations and operations in an effort to identify a restaurant that best represents New Mexico.

According to Chief of the Boat, MMCM(SS) Roger Meffley, “the competition was stiff. There are many excellent restaurants in New Mexico. In the end, we felt La Posta best exemplified what is enchanting about New Mexico…quality people preparing and serving authentic Mexican food in a historic centuries old adobe Stagecoach Stop. We are excited about our selection and look forward to incorporating many of La Posta’s recipes in our crew menu.”

The “crew” of La Posta was thrilled to hear they had won the competition. “What an honor and a privilege,” said owner 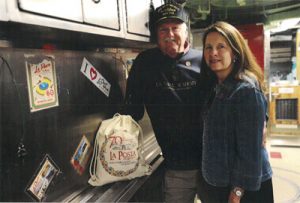 Tom Hutchinson, a retired former Naval Aviator and Navy Captain. “This is a real tribute to our staff, customers, Mesilla and Las Cruces.” According to Jerean Hutchinson, members of the crew spent several days in the kitchen at La Posta evaluating recipes and monitoring food preparation.

“Two of our country’s finest, CSi Jeremy Flake and CSSA Geoffery Obermaier had the opportunity to work side by side with our kitchen staff, many who have worked here for over 30 years. We also scheduled tours of the facilities of our local vendors including Chavez and Baca Farms, Biad Chile and Resolex to give them a farm-to-kitchen perspective of our business.”

The USS New Mexico is just the second ship of the United States Navy to be named after the 47th state. She is the Navy’s sixth Virginia class submarine, has a crew of over 120 officers and sailors, and cost $2.7 billion dollars. The keel for the USS New Mexico was laid in April, 2008 and was christened on December 13th of that year. She was commissioned in 2009. 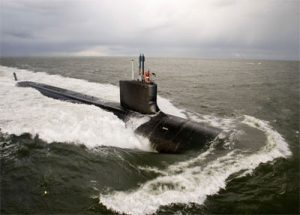 The Hutchinsons attended the christening in Newport News, Virginia, along with other members of the community. According to Jerean, “If we could have brought our whole staff we would have. This is as much a recognition of their many years of hard work, dedication and loyalty as anything else. What an honor for all of us!”

A scale model of the USS New Mexico SSN 779 along with a New Mexico State Flag flown by the crew at the North Pole is on permanent display in the entrance hallway to La Posa. You may also purchase USS New Mexico baseball caps, mugs, shot glasses and other items in the La Posta gift shop. All proceeds from the sale of this merchandise go to the ship’s morale, welfare and recreation fund.