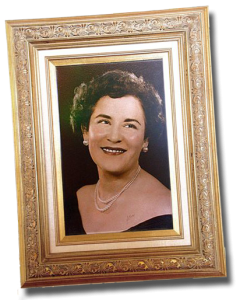 Katy Griggs was born August of 1914 to a renowned merchant family in Mesilla. In 1939 she would acquire the northwest corner, of what is now the La Posta Compound, from her Uncle Edgar Griggs for “one dollar love and affection” according to the deed.

With just four tables on a dirt floor, her mother cooking in the back of the same room (what is now the Banquet Room) with no running water, Katy started her La Posta Café. Those that remember that September 16, 1939 day recall a large crowd turning out to taste her Mexican food dishes prepared from recipes handed down over the years from the Fountain, Chavez and Griggs families.

Katy welcomed each table with a free bowl of “tostadas and chile”, a tradition she started in the Mesilla Valley and still exists today which we now we refer to as “chips and salsa”. As the story goes, Katy ran out of food that first day a few hours before closing. She tearfully apologized to all who ventured to Mesilla to taste her cuisine, vowing never to let that happen again.

Katy quickly gained a reputation as a hard working, shrewd but smart business woman. She was very generous and giving and would often be seen loading up the trunk of her car with freshly prepared food to deliver to a church or a needy family or friend. Her little “chile joint”, which she affectionately called it, would grow to be a favorite dining spot in the Mesilla Valley and eventually achieve national and international acclaim.

It was not unusual to witness U.S. Senators, Congressmen, visiting dignitaries and movie personalities dining at La Posta. And yes, even a few Presidents have enjoyed her Mexican food. Until she passed away in 1993, Katy was very involved in her business and community. You would still find her in the kitchen or visiting guests in the dining rooms, sharing a few jokes that today might make a sailor blush. Her sister Connie and brother Edgar would follow in her foot-steps and also open their own restaurants in Albuquerque and El Paso respectively, El Pinto and Griggs Restaurants.