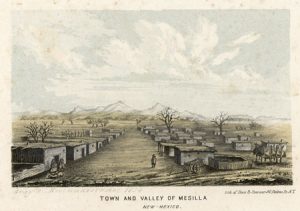 The history of what is now Mesilla, NM dates back to at least the 16th century if not before. The land was first inhabited by Native American tribes, including the Mansos, and Pueblos which were located north and west of the village.

In 1540-1541 Spanish Conquistadores, and more specifically, Coronado, crossed the Rio Grande into Northern Mexico, followed in 1598 by Don Juan de Onate to colonize Nuevo Mexico.
The route between Mexico City and the capital of Nuevo Mexico, Santa Fe, became known as the El Camino Real.

The settlement grew rapidly, and became a popular stop on the Butterfield Overland Stage Line by 1858. By 1860 it had over 2000 residents, making it the largest town between San Antonio, Texas and San Diego, California. As the town continued to grow it saw a number of characters from the Old West frequent her streets. Billy the Kid was jailed at the courthouse just across the street from La Posta. He was defended by Colonel Albert J. Fountain who had his practice just up the block. Ulysses S. Grant stopped at La Posta overnight while riding the Stage Coach, as did Kit Carson, the famous tracker.

According to history, Mesilla Plaza was a lively place, with people coming from miles around to attend rooster fights, play cards at local saloons and enjoy food and spirits at the Corn Exchange Hotel, now known as La Posta.

The town finally lost prominence to nearby Las Cruces when it refused to sell right-of-way land to the Santa Fe Railroad—a mistake Las Cruces did not make. With Las Cruces and not Mesilla now the stop for the new mechanism of commerce and transportation—the train—Mesilla would eventually turn into a sleepy, agrarian village populated mostly with farmers.

What results, however, is a well-preserved piece of Western history. Mesilla Plaza is surrounded by historic buildings, all listed on the National Register of Historic Properties. From San Albino Basilica to the local saloon, each has a story to tell. No story, though is more rich and entertaining than La Posta’s!